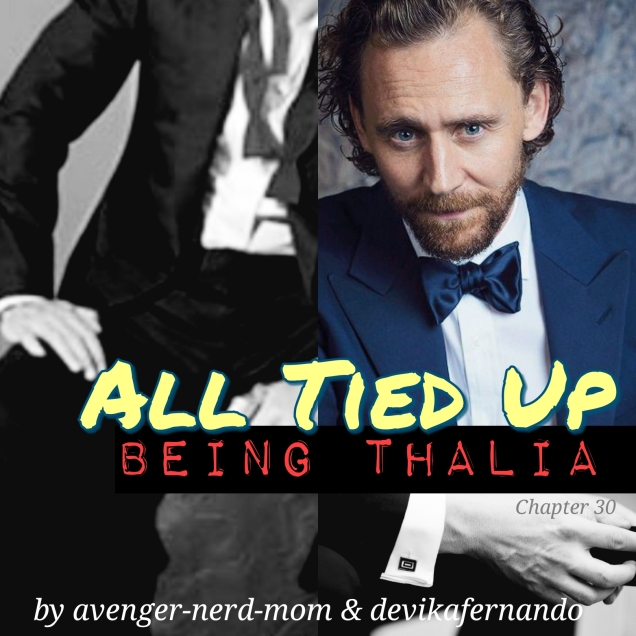 In the sequel to Educating Thalia, the lovely Thalia Bareo is growing up, making her own way in the world after losing both men she loved, Professors Chris Evans and Tom Hiddleston. The sassy full-figured Puerto Rican girl from Chicago holds down a job in Madrid as she tries to deal with the real world. She continues her studies and freelances as a consultant for museums around the world. Being Thalia updates are posted on Wednesdays and Sundays.

Warning: As a whole, this work contains adult content. If you proceed you have agreed that you are willing to see such content. Each chapter will not be coded with individual warnings. The overall story contains no hidden triggers.

If you are new to the series and characters, click here to the beginning of Educating Thalia.

If you are looking for other stories in the sequel, click here for the beginning of Being Thalia

Summary: Thalia finds another- very sexy- way to cling to her independence.

Thalia can barely unlock the door, with Tom’s hands fumbling under her dress, his crotch nestled up against her backside. “Can you wait two more minutes? There are cameras in the hallways,” she hisses quietly. Not that she really wants him to stop, but she’d rather not get busted for inappropriate behavior at work. Shaking her head slightly, the irony is not lost on her.

She’s at her place of business, getting ready to fuck the man she used to work for- her college professor- in her office.

Guess the tables have turned.

He looks up and down the long hallway. Burrowing his face in the crook of her neck, he nips his teeth at her exposed shoulder. “And no lights. No one will know I’m trying to get your knickers down before we’re even through the door.”

Distracted, she drops the key. “Shit,” she mumbles.

Tom bends to retrieve it, his other hand sliding up her thick thigh as she grabs the key from him, finally opening the door. Holding tightly to the door knob, she wags her finger at him. “My desk is all laid out for next week’s budget meetings.” Dropping her hands to his solid chest, she runs her hands up his tight form before slowly undoing his tie. “Don’t even think of clearing it off in a mad dash.”

He solemnly crosses his finger over her chest, his fingertips dragging over the top of her exposed cleavage. Thalia holds her breath, feeling her skin rise in goosebumps at his slightest touch.

“I promise. I’m thinking of fucking you right off, against the wall, love. I can’t even wait ten seconds to cross the room to the desk.”

A rush of heat slams between her legs, his words, his hands, his mouth, causing her to melt down quickly. He pushes her through the door, banging it against the wall. Something in the dark room crashes to the floor. Moonlight casts shadows around them, but she can’t tell what’s broken – not that she gives a shit at the moment. She hastily kicks the door closed with her foot, pulling at the buckle of his dress pants.

Unbuttoning his pants, her shawl falls down her arm. Hit with sudden inspiration, a sinful thought fills her mind. Lifting her head, she keeps her face firm. “No.”

Air is sucked from his lungs as Thalia moves quickly, tugging his pants down and forcing him to sit on a nearby chair.

“You said I’d get my turn.” Flicking her wrap over her arm, she hitches her dress up, planting herself on his lap. Wet and ready, her slick panties caress over his exposed hardness while she pushes his shoulders back, his arms over the top of the chair. Staring into his eyes, she holds back a devious grin. Leaning forward, trapping the lace shawl between them, she brushes her chest against his, whispering in his ear, “It seems like it’s a perfect time for me to tie you up.”

Licking his ear lobe, she grinds down on him, reaching around his shoulders and tying the wrap behind him.

Nuzzling his nose in her hair, growing harder against her heat, Tom pleads, “Fuck me.”

Instinctively, Thalia wants to obey. He’s using that deep, growly voice that promises the wickedest things imaginable, the words sounding even dirtier in his posh accent. But no-

She’s doing this her way.

“That’s the plan.” Lifting from him, her mouth crashes into his. She scrambles to move her skirt out of the way, drawing her underwear to the side and sinking down onto his stiff, thick cock. “Oh, sweetness,” she mutters, pulling off his lip.

Their kisses chase one after the other, Tom pinned to the chair under her weight as she pushes down on him, grinding closer to their release. His arms useless, Thalia plants her feet firmly on the floor. Laying her hands on his shoulders she pulls off him, before slowly impaling herself again. A moan escapes her lips, while he holds his breath tightly. Sounds from the party filter through the building, hiding their groans and whimpers from the intoxicated revelers. With a quick boost up, Thalia repeats the motions, bringing Tom right to the edge. His long legs tighten under hers, his breath quickens in his chest as his eyes dilate, turning black with lust.

“Kiss me while I pour into you, Mistress. Take me as yours,” he pants, barely able to hold back.

“Uh, uh.” She shakes her head ‘no.’ Thalia rises again, leaving his tip barely in, swaying her hips side to side, before sheathing him once again. The force rocks the chair, but the two stay balanced. She can feel the strength rising up from his feet, an unstoppable force. Her mouth hovers above his, breathing in his air, brushing her nose against his, inhaling his scent, before hungrily claiming his mouth.

So connected, her velvet walls grip him tightly, each surging pulse of his release filling her as her own orgasm crests. Yanking his hair, she tilts Tom’s head back, latching her lips over the exposed area of skin, under his earlobe. The scruff on his jawline scratches her cheek as she bites and marks him, staining his skin with her lipstick. He gives a full-body shiver, his head dropping even further back in surrender. She slumps against him, equally sated.

It takes him a while to lift up his face and blink at her.

“Oh, Jesus.” His breath is hot against her skin. “Am I still alive? Did you kill us? What a way to die!” He chuckles. “Now, give me your mouth, love.”

“Not because you tell me to-” She meets his need, her lips parting, accepting his tongue to tangle with hers. Breathy, she finishes her sentence, “Because I want to.”

“Giving yourself to me makes you no less independent, darling.” He cocks his eyebrow, a challenge in his eyes. “No more so than being tied to this chair makes me unable to move my arms. I’m trapped here because you wish it so.” To prove it, he twists his torso and gives a yank with his arms, freeing himself.

Kissing the tip of his nose, she rises off him, her wobbly legs making her collapse to the floor. “Are you saying I need to work on my knots?”

“I’m saying everything I do is for you, your wishes, needs and desires.” Sliding off the chair and landing next to her, Tom hands her shawl back. Pulling his shirt down, covering himself, he wraps his arm over her shoulder. “We can learn together, Thalia.”

One thought on “All Tied Up”