This little drabble doesn’t offer any answers to “What’s Thalia been up to?” or “Who is Thalia dating?” This is just a summer Saturday, a little peek into her life…

If you don’t know the story of Thalia and Professor Tom, or how Professor Evans fits into all this, start at the beginning. Read Educating Thalia on WordPress.

“Bloody hell, that was clearly offside!”

With an indignant half-yell, Tom sets his chips bag down on the table with somewhat too much force. To his right, Thalia shouts her support.

“At least by a foot! Is the side referee blind or what?”

God, she truly is the perfect football companion, Tom thinks to himself with a grin. He’s infinitely glad that he can share the experience with her. Still giddy that England has made it to the quarter finals of the FIFA World Cup 2018, he’s practically bouncing in his seat with energy. He’s already dashed off to the loo twice, feeling like a little boy again, and eating as well as drinking too much—but so is the excited, gorgeous woman on the couch next to him.

They are watching the match at her place, and though she still didn’t have a TV when she moved into this apartment, Tom quickly rectified the situation. Just so they could follow England’s journey to victory, he’s bought a huge flat-screen. Thalia, on the other hand, has invested in face paint, little flags, and football—correction, soccer—jerseys of the teams that have her support. 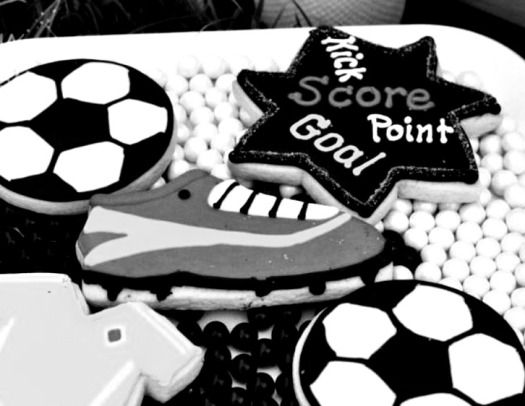 Tom smirks to himself and shakes his head a little, hiding his expression behind another cookie. Thalia’s Latina side has been showing itself repeatedly the past few weeks. She’s been vocally supportive of every single Central- and South-American team, especially Mexico and Brazil, often growing animated while watching the matches. He’s been ribbed endlessly—and enjoyed the hell out of it; not least because their excitement during the match inevitably leads to after-match romps in the sheets.

Now that there are only European teams left, Thalia has switched sides and gifted her loyalty to the English team alongside him, and it never fails to make him smile how enthusiastically she cheers—and curses—for them as well.

“What are you smiling about so smugly?” Her raspy voice interrupts his thoughts.

Tom leans over to press a rather chaste, smacking kiss onto her luscious lips, startling her into a squeak. “Nothing in particular. And everything at once.” He steals one of her marshmallows, gobbles it up and holds his finger out to let her lick the sweet powder from the digit—which she does with blazing temptation in her eyes. He winks at her and says, “Hold that thought,” and he hurriedly refocuses on the second half of the match. “I’m just so happy to be sharing all this with you.” Tom gestures broadly, loving it that she returns his smile now.

She opens her mouth to reply but then both of them freeze for a second, eyes glued to the screen.

They shout it simultaneously, exchanging a disbelieving-overjoyed glance before taking in the replays of the header that puts England firmly in the lead. With a score of 2:0, they’re as good as through to the semifinals now.

“Oh my god, oh my god, fucking yes!” Tom jumps up from the couch, nearly upending his popcorn bowl while he pumps his fist into the air.

Thalia is clapping and whooping, and his eyes are drawn to her outfit. While he has opted for comfy, holey sweatpants and a faded England jersey he’s saved all the way from his twenties, Thalia is wearing black yoga pants and a very new team jersey that’s so tight it stretches over her ample curves like a second skin. Dammit, she’s delicious like this, eyes glowing, hair wild, cheeks flushed, and bosom heaving.

Ball not boobs, Hiddleston, he reminds himself and tears his gaze away from her generous breasts with great effort.

They settle down after some more cheering, their hands reaching for the popcorn at the same time.

She shrugs and lifts a saucy brow at him. “So? You’re hardly in a position to get your underwear in a twist about age differences, Professor.”

For a moment, he can only splutter and gape at her, then he narrows his eyes at her smirk. Oh, he’ll punish her for all that sass, after the game is over…

Refocusing on the quarter final just as Sweden is unable to turn a really good shot at the goal into an actual point for them, Tom rests his hand on Thalia’s thick thigh, fingers digging in possessively.

He feels her shudder once and snuggle closer, though she keeps her attention on the TV. All right, all right, he knows he shouldn’t feel a slight stab of jealousy over a football player she might find ‘cute’, but it does bring out his possessive side. Tom lets his fingers glide a little higher on her thigh. He’s been trying all this time not to glance at a certain corner of the room and to keep his jealousy at bay. A corner with a shelf that holds three framed photographs he can’t stand to look at for long.

Thalia with a now older child, Avery, both of them making silly faces at the camera. Avery in a colorful butterfly costume from probably some school play or other. And the third photo, which he avoids looking at the most…of Thalia, Avery and her father, Professor Evans. Tom knows that Thalia has been keeping in touch with both of them and spends quite some time with them when her work schedule allows. And he shouldn’t begrudge her that. He’s knows better now, doesn’t he? He rubs over the small scar on the back of his knuckle. He fucking knows that he can’t go all Neanderthal and throw her over his shoulder to haul her away to a cave and keep her away from the rest of the world. But still, it stings.

This isn’t the time for pondering and moping, dammit. It is her apartment, although his touches also fill the space. Rare tomes and artifacts from their travels together. And the bed they share. He cocks his head. Let the other man have a photo. He has the real thing..

Downing the last of his beer with his free hand and setting the can down a bit forcefully, Tom straightens his shoulders and puffs up his chest. Just when he pays attention to the match again, a Swedish player crumbles to the ground, clutching his ankle and grimacing in pain.

“Oh, sod off, you bleeding actor you!” He grouses and thumps his fist against his thigh before throwing his hand up in disgust, displaying his long fingers. “That was barely a touch, there’s no need to pretend you’re dying.”

Thalia snort-snickers and nudges him with her elbow. “Takes a performer to know one, huh?”

He relaxes a bit to snicker too, watching as the referee gives a free kick to Sweden. “I’m just glad we’ve seen fewer fouls this time than in 2014,” he says, calming down somewhat and hoping fervently that the free kick won’t provide the opposing team with a goal chance. “The VAR introduction seems to help.”

Once the situation is diffused, he and Thalia discuss the Video Assistant Referee system, Tom weighing in with some previous experiences from club team matches which Thalia doesn’t usually watch.

“But I bet a lot of fans and even players are blaming the VAR for their team going out of the tournament,” she adds and devours another of the mini-sandwiches that Tom has prepared as a snack.

“Mhm, probably.” Tom leans over to lick a smudge of mayonnaise off the corner of her mouth, then lets his tongue glide leisurely over her lips. When they part, he delves in quickly, laps at her tongue and draws back to savor the taste with a quiet hum.

Focus, he orders himself, seeing Thalia pull herself together and redirect her gaze to the television too.

“Speaking of bets,” he says, “it looks like I’ll soon be enjoying a day to do with you whatever I please.”

Thalia baited him into betting at the beginning of the World Cup. She swore France with all its young, dynamic players would win this time, but of course Tom insisted it would be England. So they’ve bet that whoever wins gets the opportunity to do with the other one whatever they want for a whole day. The wicked possibilities have him rubbing his hands together, but Thalia just scoffs and rolls her eyes at him.

“Not so fast. England hasn’t even reached the semis yet.”

The next moment, Tom whoops in glee as the referee’s whistle indicates that the match is over.

He turns to her for a high five, which Thalia gives him with a shake of her head but also a wide, happy grin.

Tom hauls her closer with one arm and pulls her onto his lap, not even caring that the players’ celebrations on screen are blocked from view.

“Now, why don’t I show you how a real man celebrates a victory, and give you a taste of what’s to come when I’ll have you at my beck and call for a whole day?” he purrs, letting his voice go lower and deeper, and feeling her shiver in his arms.

She adds the last word softly, after a brief hesitation. Now that they’ve mostly moved away from the ‘Professor and student’ thing and that Thalia has grown more mature, they don’t often return to their slight dom-sub tendencies from the beginnings. But whenever they do, both of them delight in the additional thrill.

Grasping the globes of her lush ass, Tom shifts her even closer and nuzzles her neck. He inhales her orchid scent, one that’s been haunting him for ages. When she makes a soft, contented sound, he turns the nuzzling into kisses, then gives in to the urge and opens his mouth over her pulse point to suck a mark. Biting down slightly until she squirms, he lets one hand wander into her unruly curls to pull her head back for even better access, continuing to lavish her neck with licks and sucks.

The raucous cheering on TV fades into the background as the fingers of his other hand slide beneath the waist of her yoga pants. She leans forward, burrowing his face in her cleavage, and removes his glasses, tossing them to the side table.

To find out the outcome, click to read “The Bet.”

If you don’t know the story of Thalia and Professor Tom, or how Professor Evans fits into all this, start at the beginning. Read Educating Thalia on WordPress.